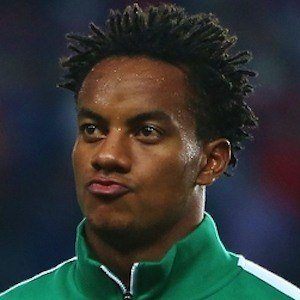 Peruvian international winger and striker who established himself at the club level with Sporting CP of Portugal's Primeira League. He signed a five-year contract with SL Benfica at the start of 2016.

After spending three years playing youth soccer with Esther Grande, he joined Alianza Lima, who he would eventually make his senior debut with.

He joined the Peruvian national team in 2011 and scored his first international goal during a friendly against Costa Rica.

He grew up in the Peruvian capital of Lima. His full name is André Martín Carrillo Díaz.

He and Adrien Silva were teammates on Sporting CP.

André Carrillo Is A Member Of