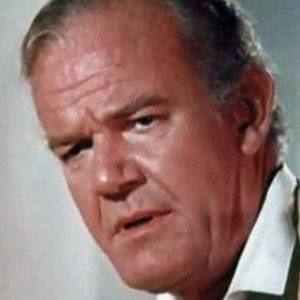 Remembered for his character roles in television series and films of the 1940s, '50s, '60s, '70s, and '80s, Duggan perhaps most famously played Cal Calhoun on the ABC series Bourbon Street Beat and Murdoch Lancer on the CBS Western series Lancer.

After serving in China, India, and Burma during World War II, he acted in Broadway productions of Anniversary Waltz and The Rose Tattoo.

He portrayed in The Homecoming: A Christmas Story (the television movie that preceded the popular series The Waltons). Ralph Waite was later re-cast in the role.

He grew up in Franklin, Indiana and later settled in Los Angeles, California. His more than three-decade marriage to Broadway performer Elizabeth Logue resulted in a son named Richard and daughters named Melissa and Nancy.

He and Don Knotts were both in the cast of the 1964 film The Incredible Mr. Limpet.

Andrew Duggan Is A Member Of