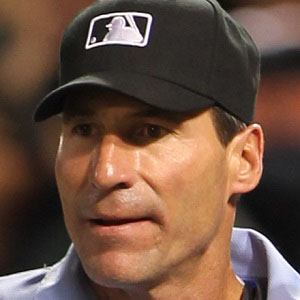 MLB umpire who has worked a number of notable series, including the 2005 World Series, 2009 MLB All-Star Game, and six League Championship Series from 2000 to 2010. He has become infamous among fans for his involvement in a number of controversial calls.

He was born in Havana, Cuba and graduated from Hialeah High School in 1981. He joined the major league staff in 1993.

Prior to an August 2001 game at Wrigley Field, he ejected guest "Take Me Out to the Ball Game" singer Steve McMichael for criticizing his umpiring over the PA system.

He married a woman named Mireya and has children named Jennifer Marie and Melissa Amanda.

He has been involved in several negative incidents with infielder Julio Lugo, whom he ejected from a game in May 2008.

Ángel Hernández Is A Member Of