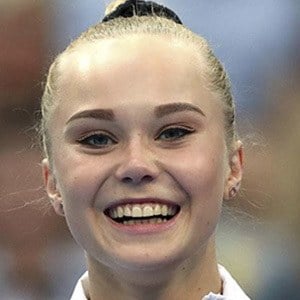 Russian artistic gymnast who won a silver medal in the team competition at the 2016 Summer Olympics in Rio de Janeiro. She took home golds at the 2016, 2017 and 2018 European Championships.

One of her first major victories was winning a team gold medal at the 2014 L'International Gymnix.

She became the all-around and uneven bars champion at the 2019 European Games.

Her grandmother took her to her first gymnastics practice, where she started her career at the age of six.

She posted an Instagram photo with gymnast Nastia Liukin in October 2019.

Angelina Melnikova Is A Member Of