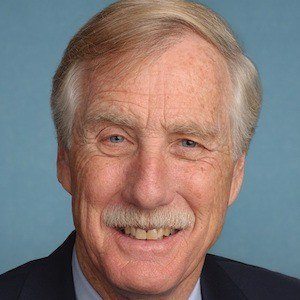 Political independent who became a United States senator from Maine in 2013 after serving as the state's governor from 1995 to 2003.

He graduated from Dartmouth College in 1966 and the University of Virginia School of Law in 1969 before joining a private law practice.

While governor, he propose a law requiring all school employees – including volunteers and contractors working in schools – to be fingerprinted by the Maine State Police.

The day after he left office as governor he, his wife Mary, and his two children went on a 15,000 mile road trip across 34 states in a 40-foot motor home.

During his tenure, he was one of only two governors to not affiliate with either of the two major parties; the other was Jesse Ventura.

Angus King Is A Member Of