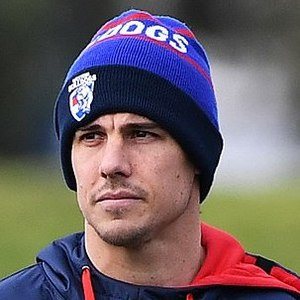 Aussie rules forward known for being one of 34 players suspended in the Essendon supplements scandal. The ruling forced him out of the 2016 season with Port Adelaide, who he'd first joined in 2013.

After being taken 14th overall in the 2004 AFL draft, he debuted with Essendon's senior team in 2005.

He earned two caps with Australia's national team in 2011. The year before, he'd led Essendon in goal scoring.

He has an older brother named Lachlan.

He and Paddy Ryder were both playing for Port Adelaide when they were suspended in the Essendon scandal.

Angus Monfries Is A Member Of