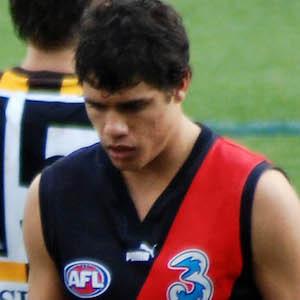 Australian football ruckman who established himself with the Essendon Bombers, before leaving the team in 2014 amidst its supplements controversy. He was later one of 34 players suspended for the 2016 AFL season.

He grew up playing for the Western Australian Football League and was the seventh overall pick in the 2005 AFL Draft.

He's an indigenous Australian, of Noongar and Yamatji descent. His father also played in the WAFL. He was named AFL Rising Star in 2007.

He married Jessica McDonald in 2014 and has two children.

He and Jobe Watson were teammates on Essendon and were both suspended in 2016.

Paddy Ryder Is A Member Of