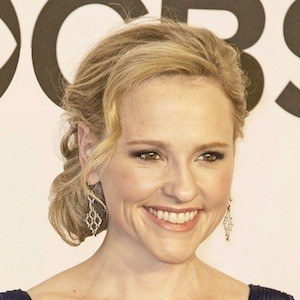 Tony award-nominated stage actress most well known for her role as Cynthia Weil in Beautiful: The Carole King Musical. She has also appeared in Broadway productions of All Shook Up, Xanadu, and Avenue Q. The latter show took her on Broadway, Off-Broadway, and on a national tour.

After studying theatre at Yale University, she would make her Broadway debut in the ensemble of RENT in 2000.

Outside her musical theatre career, she released a solo album titled Sing You To Sleep.

She married musician Freddie Maxwell in 2015 and they later gave birth to a son named Kie Larsen.

She joined Jessie Mueller and Jake Epstein in the original Broadway cast of Beautiful: The Carole King Musical.

Anika Larsen Is A Member Of