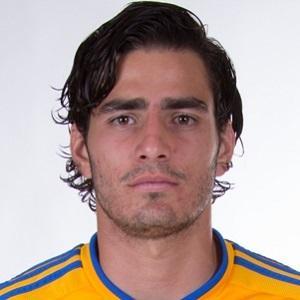 Mexican soccer player who won Milk Cup and FIFA U-17 World Cup titles with the Mexican national team. In Liga MX, he has played for clubs like Club Atlas and Tigres UANL.

He began his youth career with Atlas in 2008 before making his senior debut with the club in 2011.

He was named Player of the Tournament at the 2013 CONCACAF Under-20 Championship.

His birth name is Antonio Briseno Vazquez. He and his wife Alethia Sada have two daughters named Alessandra and Antonella.

He has been teammates with Herculez Gomez at Tigres UANL.

Antonio Briseno Is A Member Of