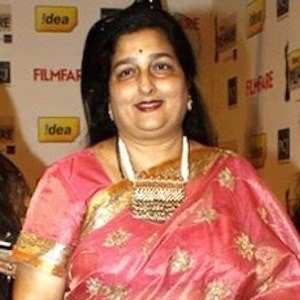 Playback singing icon who has won Filmfare Awards for her work on several Bollywood films, including Utsav (1984), Aashiqui (1990) and Dil Hai Ke Manta Nahin (1991). Her contributions to Indian cinema earned her the Mother Teresa Award for Lifetime Achievement in 2011.

She attended Xavier's College in Mumbai, India. Her playback career began with the film Abhimaan (1973).

In 2017, she received the Padma Shri, one of the highest civilian honors given by the Indian government.

She was married to composer Arun Paudwal until his death in 1991. She is the mother of Aditya Paudwal and singer Kavita Paudwal.

Anuradha Paudwal Is A Member Of