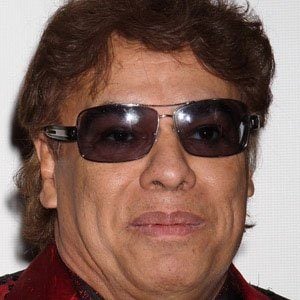 Legendary Mexican singer and composer whose album Recuerdos II became the best-selling album of all-time in Mexico. He released more than 40 albums throughout his career and wrote over 1,800 songs. He's best known for classic hits like "Así Fue," "Hasta que Te Conocí," "Querida" and "Amor Eterno," among many others.

He studied music composition while in boarding school. He wrote his first song "La Muerte del Palomo" at the age of 13. His first stage name was Adán Luna.

He starred in more than 10 movies including the biographical film trilogy Del Otro Lado del Puente, El Noa Noa and Es mi Vida/El Noa Noa 2. In May 2002, he unveiled his star on the Hollywood Walk of Fame.

Juan Gabriel Is A Member Of