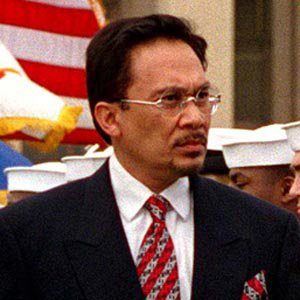 Former Deputy Prime Minister of Malaysia who became the informal leader of Keadilan, the People's Justice Party in 2008. He also became a Member of the Malaysian Parliament for Permatang Pauh in 2008.

As the finance minister during the Asian financial crisis of the late 1990s, he was fired from his post and then jailed on charges of corruption.

Though barred from office for a time, he returned to politics in 2008 and in early 2013 he launched his bid for the premiership of the country, as the head of a three-party coalition.

He married Wan Azizah and they became parents to five daughters and a son.

Najib Razak, like him, was another prominent leader of Malaysia, who made his focus expanding the country's affordable housing.

Anwar Ibrahim Is A Member Of