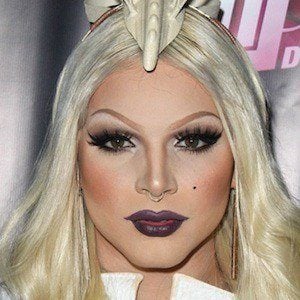 She gained prominence as a contestant on season 6 of LogoTV's RuPaul's Drag Race. She was eliminated in episode 4.

In 2007 she began studying at La Escuela de Artes Plasticas, where she won the most coveted art award the school offered. In 2011, she went on to win Miss Krash Puerto Rico.

She is fascinated with the topic of gender and gender expression and seeks to bring it to the public by exploring it through fashion and Drag. Her documentary about transsexuals and drag queens in Puerto Rico titled Mala Mala was released in 2015.

She was born Jason Carrión in Puerto Rico, where she grew up with two older brothers.

She appeared alongside Adam Lambert on RuPaul's Drag Race.

April Carrion Is A Member Of