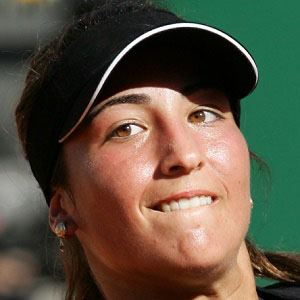 French-Iranian tennis player who has earned victories at high-profile events like the 2009 WTA Tournament of Champions in Bali, Indonesia. She has bested many of the world's top players during her career, including Victoria Azarenka, Caroline Wozniacki and Venus Williams.

She was born in Saint-Etienne, France and took up tennis after serving as her older brother's ball girl.

She went on hiatus from tennis after losing in the first qualifying round of the 2014 Australian Open. She announced her return by taking a wildcard into the qualifying draw of the 2015 French Open.

She defeated countrywoman Marion Bartoli in the final of the 2009 WTA Tournament of Champions.

Aravane Rezai Is A Member Of