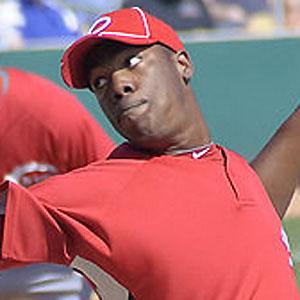 MLB relief pitcher who began his career with the Cincinnati Reds in 2010 and earned his first All-Star game selection in 2012. He helped the Chicago Cubs win the 2016 World Series, the franchise's first title in over 100 years. After the 2016 season, he signed a 5-year deal with the New York Yankees.

He pitched for the Cuban national baseball team before coming to the United States in 2009.

In 2010, he was clocked for the fastest recorded pitch in MLB history at 105.1 MPH. He tied his record by throwing another pitch at this speed in 2016.

He has one daughter, Ashanti Brianna, with Mendosa Santiestelas. He had a son named Atticus in 2014.

He became teammates with star first baseman Joey Votto on the Reds in 2010.

Aroldis Chapman Is A Member Of