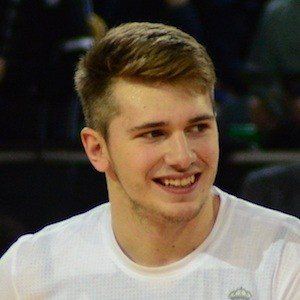 Shooting guard who first gained attention while playing professionally for Real Madrid in Liga ACB and EuroLeague. He was selected third overall in the 2018 NBA Draft by the Atlanta Hawks, who then directly traded him to the Dallas Mavericks. He was named the NBA's Rookie of the Year in 2019.

He began playing basketball while attending a school in Ljubljana at age 7. He came up through Union Olimpija's youth system before signing a contract with Real Madrid at age 13.

He won the EuroBasket 2017 tournament while representing Slovenia.

He is the son of basketball player and coach Saša Dončić. He has been in a relationship with model Anamaria Goltes.

Luka Doncic Is A Member Of