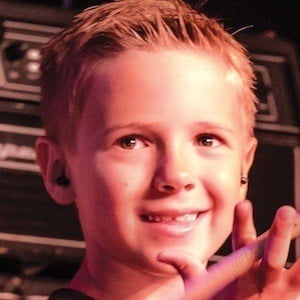 Drummer and YouTube star who rose to fame as a child performing drum covers of popular rock songs on his self-titled channel. He's earned more than 420,000 subscribers posting covers of bands like Kiss, Metallica, and AC/DC.

He began playing toy drums at the age of two. By three he was performing at his daycare talent show and by six had his first viral video in his YouTube performance of "Hot for Teacher" which has earned more than 3 million views.

One of his most popular song covers is of Metallica's "Master of Puppets," a video which has earned more than 10 million views since it was posted in April of 2013.

His parents both have a deep love and appreciation for classic rock music.

In August of 2014, he was invited by Eric Singer to perform "Love Gun" on stage with the rest of KISS.

Avery Molek Is A Member Of