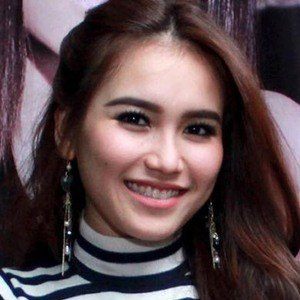 Indonesian pop star who sings in the dangdut genre. She rose to fame for her hit single "Alamat Palsu" ("Fake Address"). Other hits include "Sambaldo," "Suara Hati" and "Geboy Mujair."

She began modeling at the age of five. She started her music career as a wedding singer when she was fourteen.

She married Henry Baskoro Hendarso in 2013 but the couple divorced a year later. She has one daughter named Bilqis.

Her hit song "Alamat Palsu" has been covered by Olga Syahputra.

Ayu Ting Ting Is A Member Of