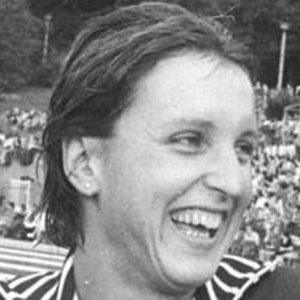 German freestyle swimmer and three-time Olympic gold medalist at the 1980 Moscow Olympics, where she won the 100 and 200 meters freestyle races, and the 4x100 meters relay.

She won her first gold medal at the 1975 World Championships in Cali, Colombia.

She broke 8 world records in her swimming career.

Her children were both born with deformed feet, which she attributed to her use of steroids.

She competed in the 1976 Olympics, the same year Sugar Ray Leonard took home a gold in boxing.

Barbara Krause Is A Member Of