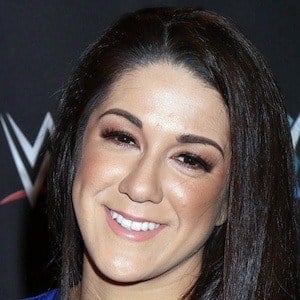 Professional wrestler who became the first ever WWE Women's Tag Team Champion alongside Sasha Banks. She's known for her time in the WWE's developmental wrestling branch NXT. She previously wrestled for promotions like Shine Wrestling and NWA Championship Wrestling from Hollywood.

She was ranked nineteenth on Pro Wrestling Illustrated's 2013 list of the fifty best female singles wrestlers.

Her birth name is Pamela Rose Martinez. She credits her parents as her biggest inspiration for wrestling. She began dating wrestler Aaron Solow and they became engaged in November 2016. The engagement was called off in February 2021.

She earned her first win in NXT by tag teaming with Charlotte in September 2013. She has competed with Ember Moon, and is good friends with Trish Stratus.

Bayley Is A Member Of