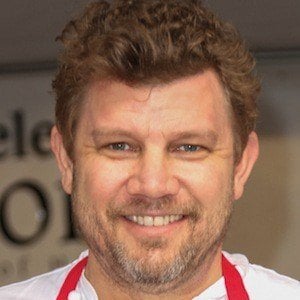 Though he grew up as an avid cook, he initially attended college with the intent of becoming a professional baseball player. However, after several injuries and a semester abroad in Europe, he turned his sights to cooking, attending the California Culinary Academy.

He became a member of the American Chef Corps, a network of chefs dedicated to being a resource for the US Department of State.

His father is Indiana Jones and Star Wars actor Harrison Ford. His mother, Mary Marquardt, was an illustrator and cook and he would often help her in the kitchen. He has three brothers and one sister: Willard, Liam, Malcolm, and Georgia. He and his wife Emily have two sons named Ethan and Waylon.

Ally McBeal actress Calista Flockhart became his stepmother after she and his father married in 2010.

Ben Ford Is A Member Of