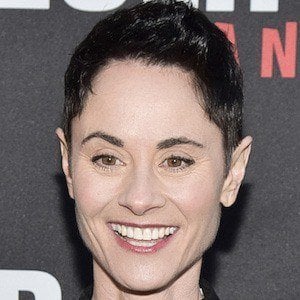 Stage actress known for her various performances in Broadway and Off-Broadway plays, she gained mainstream prominence after originating the role of graphic novelist Alison Bechdel in the hit musical Fun Home. The role earned her a Tony Award nomination for Best Actress in a Musical.

Her first part in a musical was playing the title role of Annie in high school. She began studying musical theatre at Loretto Heights College and earned her Masters at UC Irvine in 2000.

In Fun Home she plays the first butch and openly lesbian character to star in the main role of a Broadway musical and she says she has learned a lot about representation and the difficulties women who are grouped under that label deal with.

She identifies as an open lesbian and married music technician, Rochelle Schoppert.

She originated the role of the present-day and oldest version of Alison Bechdel in Fun Home. There are two, younger versions of Alison in the musical, which were originated by Sydney Lucas and Emily Skeggs.

Beth Malone Is A Member Of