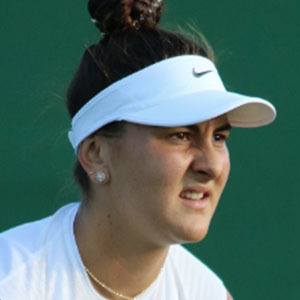 Professional tennis player who became the first Canadian to win a grand slam singles title after she defeated Serena Williams in the 2019 US Open final.

She first started playing tennis at the age of seven. She joined the Tennis Canada's National Training Program in Toronto at 11 and went on to compete within the Juniors level in 2014. She made her ITF debut in 2015 and in 2016 she won her first career title at the Australian Open.

She was named the Tennis Canada Female Player of the Year in 2017 and also won the Fed Cup Heart Award that same year. She earned her first WTA title with a win at the 2019 BNP Paribas Open.

She was born and raised in Thornhill, Ontario, Canada. Her father's name is Nicu Andreescu.

She defeated Camila Giorgi in the opening round of the WTA Tour in August of 2017.

Bianca Andreescu Is A Member Of