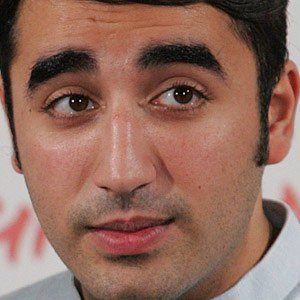 Pakistani politician who became the Co-Chairman of the Pakistan Peoples Party in 2007. He is the only son of former President Asif Ali Zardari and former Prime Minister Benazir Bhutto.

He grew up in London and Dubai as a result of his family's need to leave Pakistan.

He was named Chairman of the Pakistan Peoples Party while still studying at Oxford in 2007.

He has two younger sisters named Bakhtawar and Asifa.

He, like the late Zulfikar Ali Bhutto, was an important figure in Pakistan politics.

Bilawal Bhutto Zardari Is A Member Of