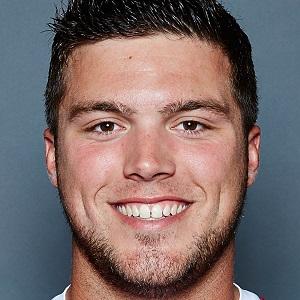 Tight end who won the 2014 Sugar Bowl as a member of the Oklahoma Sooners. He was named Most Valuable Player of the 2011 Insight Bowl after rushing for three touchdowns in the game. He was a fourth round pick of the San Francisco 49ers in 2015.

He was a quarterback at Bishop Carroll Catholic High School in Wichita, Kansas.

He was drafted by the Detroit Tigers in the 2010 MLB Draft but declined to sign with the team.

He was the backup quarterback to Landry Jones in 2011.

Blake Bell Is A Member Of