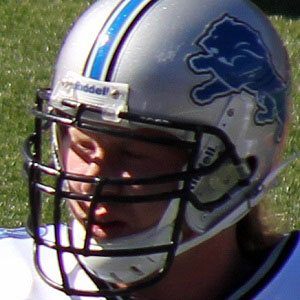 Linebacker most famous for his years as a member of the Dallas Cowboys, Detroit Lions and New England Patriots. He was a two-time Second-Team All-Big Ten selection at Ohio State University before being drafted by the Cowboys in the first round of the 2006 NFL Draft.

He attended Lancaster High School in Lancaster, Ohio, where he made the district finals in swimming in addition to being a football star.

He and his father both played for Hall of Fame head coach Bill Parcells.

His father is NFL running back Bob Carpenter. He has younger brothers named Jonathan, Georgie and Nathan.

He played with fellow linebacker Keith Brooking in Dallas.

Bobby Carpenter Is A Member Of