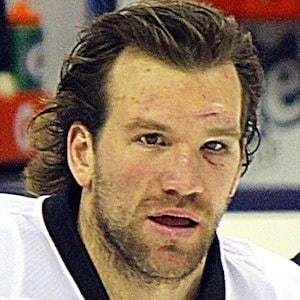 NHL winger known for his physical play, averaging more than two penalty minutes per game at all professional levels. He first played in the NHL in 2014 while a member of the Pittsburgh Penguins.

He played college hockey at Brown University, where he averaged around one penalty minute and half a point per game.

He was an ECAC All-Academic member all four years in college. He was a standout third baseman in high school, hitting over .400 as a senior.

He was born to Bob and Glorianne Farnham and has two sisters. His father and two of his uncles played football at Brown and his cousin played for the New England Patriots.

He became teammates with Jordin Tootoo when he signed with the New Jersey Devils during the 2015-2016 season.

Bobby Farnham Is A Member Of