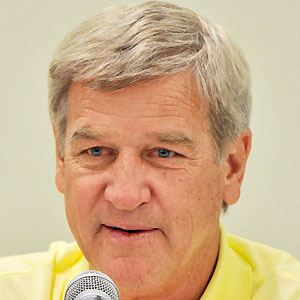 Legendary NHL defenseman who spent ten seasons with the Boston Bruins, setting several records including the most points and assists in a single season by a defenseman. He was inducted into the Hockey Hall of Fame in 1979.

He began his professional career in the OHA with the Oshawa Generals in 1963.

He won eight consecutive Norris Trophies as the league's top defender and three straight Hart Trophies as the NHL's MVP. His celebratory dive after winning the 1970 Stanley Cup became one of the most iconic pictures in hockey history.

He was born to Doug and Arva Orr and raised with four siblings. He married Margaret Louise Wood in 1973, with whom he had two sons.

Bobby Orr Is A Member Of