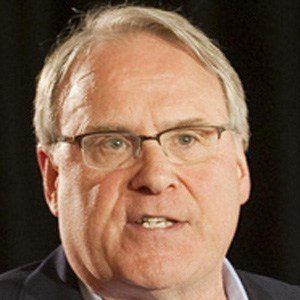 Hockey Hall of Fame goaltender who played for the Montreal Canadiens and later joined Canadian Parliament.

Although he was drafted in the 1964 NHL Amateur Draft, he chose to pursue his college degree at Cornell University rather than play with the Montreal Canadians; he made his NHL debut in 1971 after completing college.

He wrote a memoir about his experiences in the famous 1972 Olympic series against the USSR.

He married Lynda Dryden in 1970. His brother, Dave Dryden, was also an NHL goaltender.

He caused some controversy when he said that U.S. Senator Howard Dean's presence at a Canadian liberal convention would make his party seem out of touch.

Ken Dryden Is A Member Of