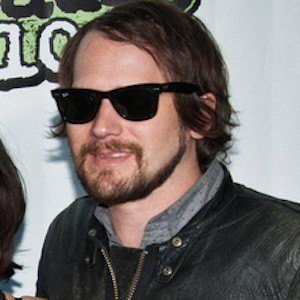 Vocalist known for being the lead singer and guitarist of the band Silversun Pickups. Their albums Swoon and Neck of the Woods both charted in the top 10 of the Billboard 200.

He originally met future band member Nikki Monninger on an international flight in 1994. The band members, all of whom knew each other personally or through friends, formed the group in 2000.

Along with reaching the Billboard top 10, Swoon and Neck of the Woods also topped the Indie charts. The albums Carnavas and Better Nature also charted in the Indie top 5.

The band is based out of Silver Lake, California and their name is derived from a nearby liquor store.

The band once recorded a cover of "Not Dark Yet" by Bob Dylan.

Brian Aubert Is A Member Of