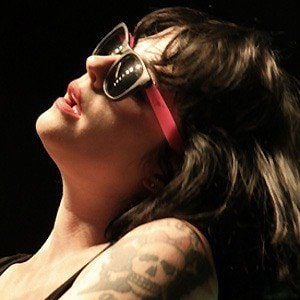 Singer, songwriter, and guitarist who was the frontwoman for punk bands The Distillers and Spinnerette.

She moved to Los Angeles with Tim Armstrong of Rancid when she was a teenager.

She has collaborated with many bands and musicians like Eagles of Death Metal, Leftöver Crack, and Garbage singer Shirley Manson.

In 1997 she married Tim Armstrong, but they divorced in 2003. She married Queens of the Stone Age singer Josh Homme in 2007 and together they have three children.

She was heavily influenced by Cyndi Lauper as a young musician.

Brody Dalle Is A Member Of