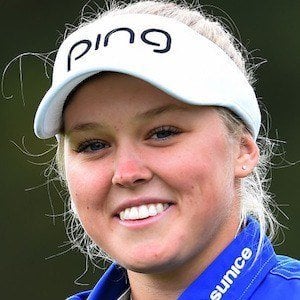 Professional Canadian golfer who finished tied for 10th at the 2014 US Women's Open at the age of 16. That same year, she finished as the world's top amateur golfer. She subsequently turned pro in December 2014.

She earned her first amateur tournament win in 2010 at age 13. It came at the CN du Quebec tournament.

She won the Portland Classic LPGA tournament on August 16, 2015. Two days later, she was granted immediate membership to the LPGA Tour going forward. She was named the Ontario and Canadian Female Athlete of the Year for 2015.

She was born and raised in Smith Falls, Ontario, Canada.

She competed against Michelle Wie, who eventually won, at the 2014 US Women's Open championship.

Brooke Henderson Is A Member Of