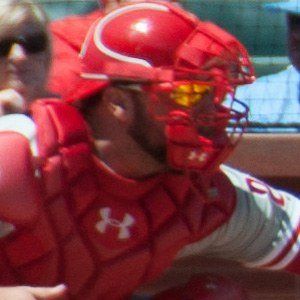 MLB catcher who was a third round pick of the Philadelphia Phillies in 2010. He worked his way into the starting lineup partway through 2015 and established himself as the heir-apparent to Carlos Ruiz.

He played three years of college baseball at the University of Texas, where he was named to All-College World Series team as a sophomore.

He was first drafted straight out of high school in 2007, but was only a 43rd round pick. He decided to go to Texas to improve his draft stock.

He was born to Kevin and Kathi Rupp and grew up with two younger siblings. His father was a minor league baseball player in the Montreal Expos organization.

He and Jesse Biddle were both selected by the Phillies in 2010.

Cameron Rupp Is A Member Of