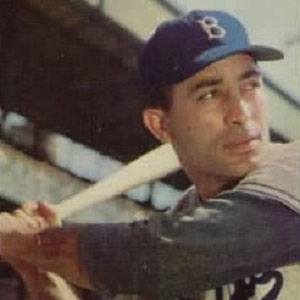 Two-time All-Star right fielder nicknamed The Reading Rifle who spent his entire MLB career as a member of the Dodgers organization in both Brooklyn and Los Angeles. He was the National League's batting champion in 1953 and won the World Series with the team in 1955 and 1959.

He dropped out of school in the eighth grade and got his start playing professional baseball in the Interstate League.

After retiring from baseball in 1960, he owned and ran his own butcher shop in Queens.

He was married to Fern Furillo until his death.

He and Jackie Robinson led the Brooklyn Dodgers to their first World Series victory in franchise history in 1955.

Carl Furillo Is A Member Of