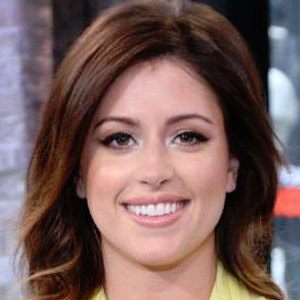 Known for being the senior entertainment reporter for the pop culture site HollywoodLife.com. She gained wide renown for her time as host of the VH1 show The Gossip Table from 2013 through 2015.

She graduated from Auburn University with a degree in radio, TV, and film. She interned on the Comedy Central series The Colbert Report as a senior.

She has served as the brand ambassador for the women's line of clothing Maggy London. She has also been an on-air personality for various pop culture programs, including The Today Show and Fox & Friends.

She married her husband Brian Mazza in 2014.

She has been a frequent on-air contributor to The Wendy Williams Show.

Chloe Melas Is A Member Of