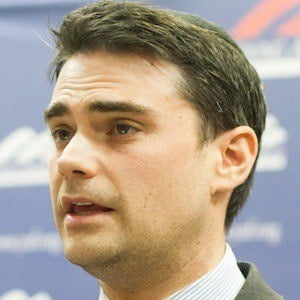 Journalist and political commentator who hosts the podcast and syndicated radio program The Ben Shapiro Show. He has worked as the editor-in-chief of The Daily Wire and has written columns for Newsweek. He has written books such as Project President: Bad Hair and Botox on the Road to the White House.

He wrote his first book, Brainwashed: How Universities Indoctrinate America's Youth, when he was 17 years old. He is known for sharing his political views on Twitter, where he has amassed over 3.7 million followers.

His sister is YouTuber Classically Abby. He married Mor Toledano in 2008 and had a daughter in 2014 and a son in 2016. His cousin is former child actress Mara Wilson.

In 2014, he wrote a book about President Barack Obama entitled The People vs. Barack Obama: The Criminal Case Against the Obama Administration.

Ben Shapiro Is A Member Of