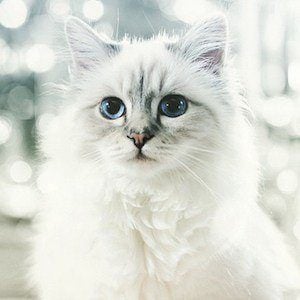 Celebrity cat who rose to fame as the pet of fashion designer Karl Lagerfeld. She has developed a social media fan base of over 230,000 Instagram followers and inspired a number of Lagerfeld's products and designs.

She made her first social media appearance on Twitter in January of 2011 when Stephen Gan tweeted out a photo of her.

She has appeared in advertisements for cosmetics and motor vehicles, including a 10 page editorial in V Magazine in September 2012.

She originally belonged to French male model Baptiste Giabiconi. She was later gifted to Lagerfeld around Christmas 2011 following a stay at his place while the model was abroad.

She was once photographed with supermodel Gisele Bundchen.

Choupette Lagerfeld Is A Member Of