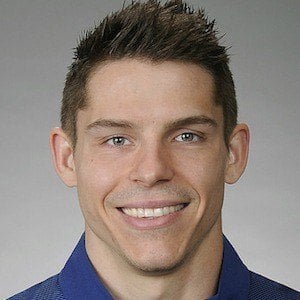 Artistic gymnast who has taken home Bronze, Silver, and Gold medals at US National Championships for events including Horizontal Bar, Parallel Bars and All-Around. He won four Golds and a Silver at the Pacific Rim Championships in 2012, and took home two Bronzes at the World Cup events in Tokyo and Worcester in 2010.

He was a highly ranked junior in high school and was a member of the U.S. Junior National Team 1999-2001, 2002-2005. He won Gold at the 2003 USA National Championships and suffered a serious injury in 2004, putting his gymnastics career on hiatus.

He was competitive gymnast for the Oklahoma Sooners from 2005 to 2009, helping them win a national championship in 2008. He was named captain of the team in 2009.

He was born in Houston, Texas to father Larry who was also a gymnast. His brother and sister were also gymnasts, and he was coached by his brother nick for two years. He lost his father in a car accident in 2008. He became engage to fellow gymnast Jordyn Wieber in October 2021.

He trained alongside Olympian Jonathan Horton as a Junior, college and Senior elite gymnast.

Chris Brooks Is A Member Of