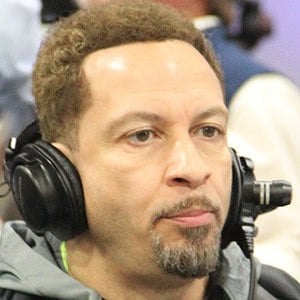 American sports analyst and commentator who is known for his work with Fox Sports 1, ESPN, and ABC. He is recognized for his coverage of the NBA and for appearing on NBA Fastbreak as well as the series NBA Countdown.

He attended Oberlin College where he graduated from in 1990 with a degree in English. He played point guard on Oberlin's basketball team. He started his career as a sports writer for The Plaun Dealer in 1990. He worked there for several years before joining the Akron Beacon Journal where he covered the NBA. He worked for The New York Times in 1998, covering the New Jersey Nets and the New York Knicks.

He gained attention in April of 2013 when he made comments on ESPN's Outside the Lines program regarding Jason Collins and his Christian faith.

He was born and raised in Baton Rouge, Louisiana and married his wife Crystal in Los Angeles. Together they had twin daughters named Alexis and Noelle.

He is known for having appeared as a frequent guest and panelist on the show First Take where he discussed sports with host Skip Bayless.

Chris Broussard Is A Member Of