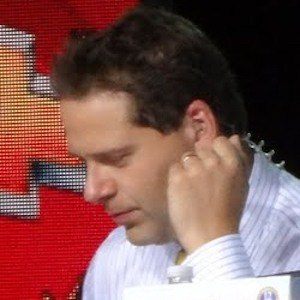 Sportscaster and television host widely known for his work with the MLB Network and NFL Network. He is most well recognized as the host of the Best Damn Sports Show Period and as a commentator on the ABC series BattleBots.

He graduated from Miami University in 1993 where he served as the station manager of the student-run radio station.

In addition to his sportscasting experience, he also hosted the Million Dollar Challenge, a Fox poker series.

He was born to parents Norton and Jackie. He was raised with three siblings, two brothers named Pete and Bob and a sister named Laurie. He has two sons named Josh and Brady.

He co-hosted Intentional Talk on the MLB Network alongside baseball star Kevin Millar.

Chris Rose Is A Member Of