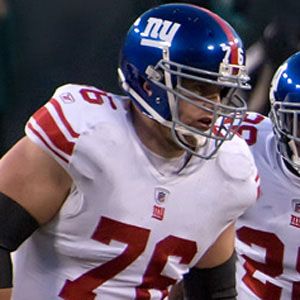 NFL guard who helped the New York Giants win Super Bowls XLII and XLVI. He was named to four Pro Bowls during his career.

He played football at Boston College.

He was selected in the second round of the 2004 NFL Draft by the Giants.

He married Kate Coughlin in 2004, and together, they had three children.

He and Eli Manning were both drafted by the Giants in 2004.

Chris Snee Is A Member Of