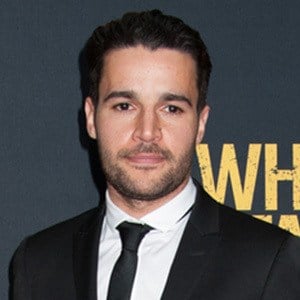 American actor who had breakthrough roles in Martha Marcy May Marlene and HBO's Girls. He portrayed the title character in the acclaimed film James White. Other film credits include A Most Violent Year, Whiskey Tango Foxtrot, It Comes at Night, First Man and Vox Lux. In 2019, he began starring in Hulu's Catch-22.

He acted on stage in 2008 productions called Good Boys and True and Mouth to Mouth which took place at the Second Stage Theatre and Acorn Theatre, respectively. He previously worked at a local video store and at his friend's wine store.

He co-starred in the television program The Sinner. He was part of the SXSW Film Festival movie All That I Am which won for Ensemble Cast.

His full name is Christopher Jacob Abbott and he was born in Connecticut. His parents are Anna and Orville Abbott and he has an older sister named Christina.

He portrayed the boyfriend of Allison Williams character in the show Girls.