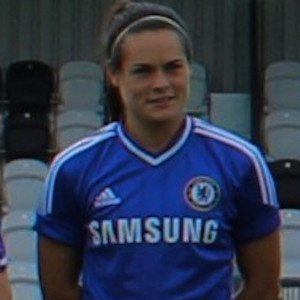 Footballer for the Chelsea Ladies since 2007 and a member of the Great Britain national team since 2012 who earned a World Cup bronze medal in 2015.

She was a product of the Kent Magpies youth system and made her professional debut with Millwall Lionesses in 2003.

Aside from soccer, she worked as a part-time analyst at Deutsche Bank and an alumnus of Loughborough University.

She was born in Orpington, London, England.

She has played as a teammate alongside Faye White.

Claire Rafferty Is A Member Of