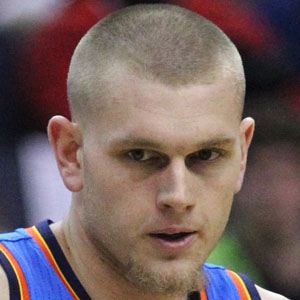 NBA center who was drafted 11th overall in 2010 by the Oklahoma City Thunder.

He played three years of college basketball at Kansas, winning an NCAA Championship in 2008.

He was traded in October 2012 to the Houston Rockets along with star guard/forward James Harden in exchange for a number of players and draft picks.

He was born to Walter and Kathleen Aldrich.

From 2010 to 2012 he played on the Oklahoma City Thunder alongside forward Kevin Durant.

Cole Aldrich Is A Member Of