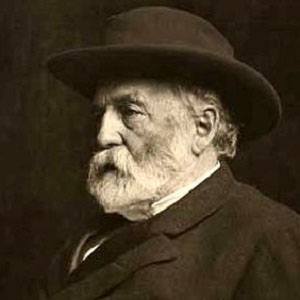 American entrepreneur who is considered one of the "Big Four" who built the Central Pacific Railroad, the railroad network which completed North America's first transcontinental railroad. He is also responsible for the development of other major railway lines, including the Chesapeake & Ohio Railway.

He began working as a travelling salesman at age 16 and co-founded a general store with his brother in 1842. He later moved to Sacramento, California at the start of the gold rush.

By developing the Chesapeake & Ohio Railway, he helped Guyandotte, West Virginia expand into a new city, which was named Huntington in his honor.

He was married to Elizabeth Stillman Stoddard from 1844 until her death in 1883 and later got remarried to Arabella D. Worsham in 1884. He had nine children.

He is considered one of the "Big Four" of the Central Pacific Railraod along with Leland Stanford, and Charles Crocker.

Collis Potter Huntington Is A Member Of