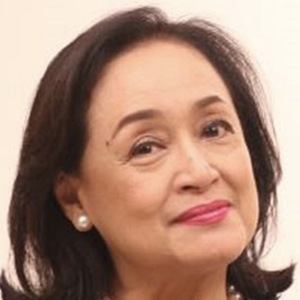 Filipina TV actress who is widely known for her role as host of the series Student Canteen and Eat Bulaga! She has earned a storied TV career between ABS-CBN and GMA in the Philippines. She also appeared in the 2013 film Four Sisters and a Wedding.

She graduated with her bachelor's degree in communication arts from Miriam College. She earned her first feature film credit in 1975's Return of the Dragon.

Her Saturday afternoon drama TV series Coney Reyes on Camera earned her several accolades, including the PMPC Star Award for TV. She appeared regularly between 1984 and 1988.

She has three children. She was formerly married to basketball player Lauro Mumar. She also dated TV host Vic Soto for a time, and the two share a son named Vico.

She appeared alongside Judy Ann Santos in the TV melodrama Huwag Ka Lang Mawawala in 2013.

Coney Reyes Is A Member Of