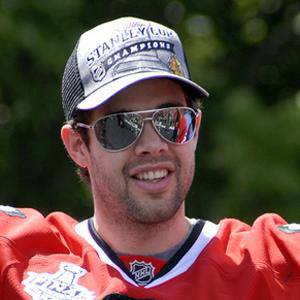 NHL goaltender who won Stanley Cup Championships with the Chicago Blackhawks in 2013 and 2015. He was selected to the NHL's All-Rookie Team in 2011 after winning 33 games with the Blackhawks.

He played for the Moncton Wildcats of the Quebec Major Junior Hockey League before being drafted 52nd overall by the Blackhawks in 2003.

He was given the William M. Jennings Trophy in 2013 after leading the league in goals against average.

He was born in Montreal, Quebec and grew up with his older brother Trevor.

He became teammates with star forward Patrick Kane in Chicago. Kane received the Conn Smythe award for playoff MVP in 2013.

Corey Crawford Is A Member Of