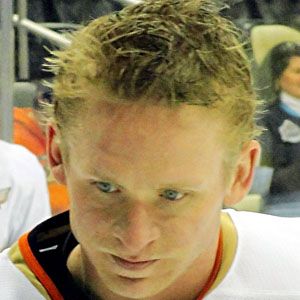 NHL winger who began his career in 2005 with the Mighty Ducks of Anaheim. He won a Stanley Cup Championship in 2007 and received the NHL Hart Trophy as the league's MVP in the 2010-2011 season.

He was selected 28th overall by the Mighty Ducks of Anaheim in the 2003 NHL Draft.

He is the son of Geoff and Nancy Perry. He married Blakeny Perry in 2015.

He became the second player behind Scott Niedermayer to combine a Triple Gold membership with gold at the World Junior Championships, a Memorial Cup win and a World Cup of Hockey win.

Corey Perry Is A Member Of