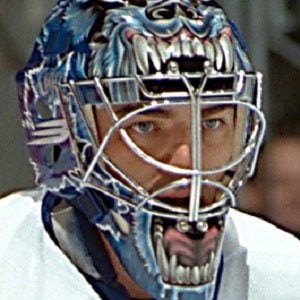 Canadian NHL goaltender known as CuJo, who amassed more than 450 wins in his 20-year professional career. He spent the bulk of his career with the St. Louis Blues, Edmonton Oilers, and Toronto Maple Leafs. He has played for 6 teams throughout his professional career.

He played one season with the University of Wisconsin and earned All Conference honors in 1988.

He became a three-time NHL All-Star and a one-time Olympic gold medalist. He has gained a large following on his Cujo Twitter account for the sports content he posts.

He grew up with five stepsiblings.

He won a gold medal for Canada with fellow goaltender, Martin Brodeur, at the 2002 Winter Olympics.

Curtis Joseph Is A Member Of