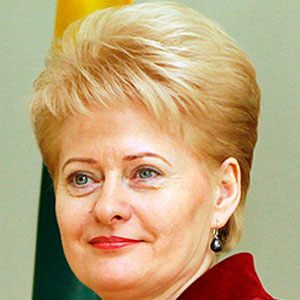 Lithuanian politician who became Lithuania's first female head of state when she was elected to the presidency in 2009. She had previously served as the European Commissioner for Education and Culture.

She has a black belt in karate.

She was born into a working class family in Vilnius, Lithuania.

She has mentioned Margaret Thatcher as a political role model. Both she and Thatcher have been referred to as the "Iron Lady."

Dalia Grybauskaite Is A Member Of